The Finnish Union of University Professors and The Finnish Union of University Researchers and Teachers published in the spring their joint objectives for the spring 2019 parliamentary elections. Parties and candidates should acquaint themselves with our objectives. Sustainable solutions to difficult problems are constructed through scientific research and development activity. Active scientific research and artistic activity are also the cornerstones of higher teaching.

During the spring and early summer, the Finnish Union of University Professors and The Finnish Union of University Researchers and Teachers have together met parties’ members of parliament and their assistants to discuss the unions’ joint election objectives. From both unions, the Chairs and the Executive Directors of the unions participated in these meetings. The composition has varied depending on participants’ calendars.

The discussions that have been had have been, if not breakthroughs, at least steps in the right direction. Particular attention has been paid to Finnish universities’ good research and education, to the university as a workplace and to the critical importance of sustainable basic funding.

The high quality of Finnish research and education can only be praised. In the spring, Times Higher Education evaluated Finnish universities as the best in the world when countries’ economic development is taken into account. OECD, too, complimented the efficiency with which Finnish universities use the funding they receive for the good of the nation. The latest news tells us that the University of Helsinki has gone up to place 57 in the Shanghai rankings and our other universities have also placed well. It is important to recognise and acknowledge the positive qualities and results associated with Finnish universities. Universities are worth the investment.

Often universities are viewed as a temporary phase of life associated with studying. For us employees, however, the university is also the workplace of experts and support staff. The objective of the Vision for higher education and research in 2030 is to turn higher education institutions into the best workplaces in Finland during one decade. Unfortunately, even according to the vision, the staff feels their well-being at work has decreased because of increased administrative strain, the uncertainty of employment and decreased opportunities for participation and influence.

In decreasing strain and uncertainty, satisfactory basic funding is important. Fluctuating funding and the changing of funding criteria make long-term and systematic activity difficult. When the former is connected to fashionable management ideologies, the objective of the vision cannot be reached through small changes. The members of the university community deserve sustainable and satisfactory basic funding and a true opportunity to participate in developing the community and in decision-making. The latter is also connected to needs to change the legislation.

The numbers from OECD show a dive in Finnish research funding. A situation has been created where we have been made to compete with the quality of research plans, not so much with results. An unreasonable amount of our researchers’ time is spent acquiring funding with relation to the funding that is received. To present it in a pointed way, resources go into applications instead of research. The basic funding of universities – really, basic funding – needs to be brought up to a steady level and on to a developing course. The university index needs to be restored.

What did I personally learn from the discussions in the spring and early summer? At least that universities are primarily viewed as educational establishments. The view is wrong, but understandable. The connection that Finnish people have to universities is constructed through studying. A view of a university as just a school has promoted the sliding of the discussion into the wrong direction. The discussion is dominated by educational policy and labour policy. Even so that educational policy is subordinate to labour policy.

In this situation, our task in the university community is to talk about the daring issues we research and develop. We need to be the ones to explain how basic research and development work will take Finland forward. The discussion needs to be steered from labour and educational policy to science policy. The dialogue can be initiated, for instance, by asking the parliament members of one’s own region about their and their parties’ science policy objectives. 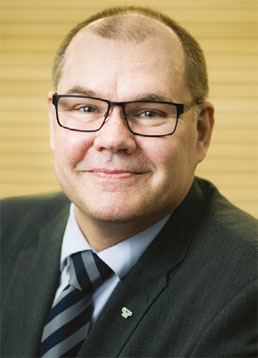