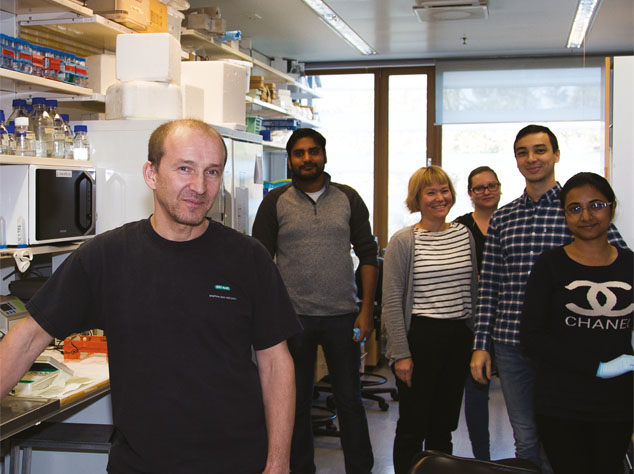 Four jobs at the same time

German-born Michael Jeltsch has made all the wrong career choices by staying in Helsinki for all his academic career. Now Jeltsch is trying to create a new way to make antibodies, make better drugs for cancer, build a database on finnish PhD students and trying to figure out who pays his salary next summer.

“You just want to know how things are and make a career out of it.”

Jeltsch himself is a good example of this curiosity, as his own group’s research has taken him in unexpected directions. For a long time, he was conducting research on how to improve existing cancer drugs. Avastin, one of the more successful cancer drugs in recent years almost always stops working at some point, and everyone would like know why. Jeltsch has a hypothesis on how to overcome at least one possible reason for this, and has been leading his own lab on the topic since 2013.

During this time, he discovered it was very difficult to generate the antibodies necessary for his experiments.

Helsinki University had discontinued its monoclonal antibody production services, so the only viable option was to start a joint project with Turku University, which still has functioning antibody facilities. But then things got complicated.

“Should our idea prove successful, it could be very valuable”, Jeltsch explains. This led to a long negotiation between the two universities on how possible future profits would be shared.

This stalled the project for a year. However, during that year, Jeltsch and his team came up with another idea: a faster and cheaper way to make antibodies.

Instead of using mice to generate them, they would use bacteria. Ideally, this would cut the production time from many weeks to two days and reduce expenses by probably 90 per cent.

The Academy of Finland liked the idea, and Jeltsch received a large grant last year. He and his group have settled to their new facilities on the third floor of Biomedicum. The research has still yet to produce a real heureka!-moment.

“We have had some setbacks – my key post-doc left for a private company in summer and replacing him has taken time”, Jeltsch explain.

He thinks there is a race against clock.

“A lot of people saw our idea when we applied for EU funding, and I’m a bit worried that they may execute it first.”

All the wrong decisions

Jeltsch was born in Germany. He came to Finland in 1995 as an exchange student at the end of his studies. The only thing he needed to do to complete them was to write his master’s thesis.

“When I was studying in Germany, all students were offered the possibility to study abroad for one year. For me, Finland was an obvious choice, as my mother is from Finland.”

—In Helsinki, he got to do his graduate work in Professor Kari Alitalo’s cancer research group, where he first completed his Master’s thesis and later his PhD. The latter was particularly important, as it included one of Alitalo’s group’s most central papers on the growth of lymphatic vessels, published in 1997. Jeltsch also won the Medix prize for the article.

After completing his dissertation in 2002, Jeltsch had plenty of opportunities: among other things, he was offered a postdoc position at Harvard. However, he decided to stay in Helsinki, as part of Alitalo’s group.

“Everyone assumes this is because I met a Finnish woman. But actually my wife, whom I met here, is Polish”, Jeltsch laughs.

But the effect was the same. They both decided to stay in Finland – on neutral territory, as Jeltsch puts it – and raise a family here.

“But I don’t think travelling is as important as it was in times before the Internet. Nowadays, you can conduct global research from your own home.”

More than twenty years in a Finnish university have shown Jeltsch many sides of the institution. He is the only Transitional Cancer Laboratory group leader from outside Finland, and the laboratory’s 7 staff members are of six different nationalities.

In his blog, Michael’s Domain, he often critiques and comments on how things at the university work — or don’t. The new renewal of the degree programs, the so-called Big Wheel, did not affect his group much, but Jeltsch is worried about the decline of foreing student applications.

“I think that the decision to make non-EU students to pay for their studies has really damaged our reputation”, he says.

“Our study program had to leave places open, since there simply was not enough qualified applicants.”

The role of a group leader is not easy either.

“The university expects me to do four jobs at once: I need to be a researcher, a teacher, a manager and a fundraiser as well. It’s a challenging combo when you have small children.”

At the moment he is figuring out how he will pay his own salary after the Academy research fellow position ends next summer.

Even still, however, Jeltsch’s curiosity got the best of him. When he found out that no one had the data on how long an average PhD student takes to earn his or her degree, he started yet a third research project in his group.

The Finnish PhD database project was originally funded by the Finnish Cultural Foundation, but is currently without resources.

“We are still missing some data because the automated publication extraction is not working well enough yet. As the funding is over, I would need to conduct the rest of the research myself – when I have the time, which might not be soon. I’m too busy applying funding for my main research.”