Coping at Work as an Early Career Researcher

According to a 2017 survey by the Finnish Union of University Researchers and Teachers, the lives of Early Career Researchers are coloured by perpetual insecurity. 1 There is growing awareness of the insecurity of the research career path and the problems particular to its early stages, such as short funding periods. Attention has also been given to the prevalence of ECR labour in the so-called academic grey market. In addition to their own research, ECRs can be burdened by unpaid work forced upon them by their schools and higher-ranking colleagues. This type of work can be difficult to turn down since ECRs are constantly required to prove their worth and there are few means available for doing so.

It is all too easy for an ECR to burn out. Many grassroots agents have commented on the anxiety and exhaustion especially of doctoral and post-doctoral researchers.2 In worst cases, exhaustion and anxiety may even render ECRs incapable for work. Burnout, mental health issues, the general insecurity of a research career, and low pay hasten the brain drain of the university sector. According to the FUURT survey, nearly 60 percent of the respondents were considering moving to the private sector and almost 50 percent were thinking of switching to an entirely different line of work.

For research to remain an attractive career path, the working conditions in the academia must be made more accommodating for ECRs. The final report calls for increasing professionalising of the early stages of the research career by harmonising the job titles of doctoral researchers, increasing their wages, and extending their funding periods. Many ECRs also face problems related to their employment rights, such as collectively agreed pay increases and travel allowances. Those grant-funded ECRs who have no workspaces or right for occupational health care are in a particularly vulnerable position. Universities must act to protect researchers in such positions to ensure that their wellbeing would not depend solely on their peers.

Any ECR who is feeling exhausted should remember that the first point of contact is their academic supervisor. Shop stewards can also be contacted in issues regarding employment, salary, and workload. Earlier this year, FUURT launched career coaching as a new membership benefit and this can be also used to get wellbeing support.3 Additional support is provided by the main representative of the subject, the head of school, and your colleagues. The Farmers' Social Insurance Institution Mela also provides wellbeing activities for grant-funded researchers. 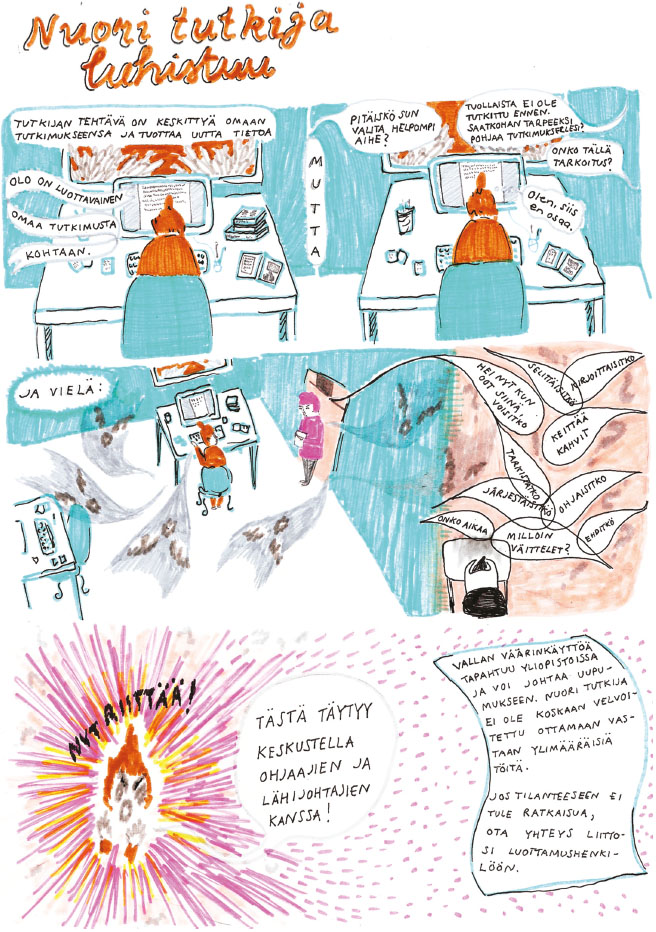