Female researchers and the academia

Johanna Lätti has studied gender parity in the academia. A year ago, she told an interviewer in the Acatiimi that men and women are still far from equal in the academic world.1 While straightforward discrimination is rare, a complicated network of relations often ensures that the “academic elite” remains predominantly male, even though the proportion of women in universities and research keeps increasing.

The statistics paint a bleak picture. 58% of all university degrees and 51% of doctorates are awarded to women.2 Yet around 70% of professors are men, and the average salary of male professors is more than 300 euros higher than that of their female counterparts.3 The increasingly popular tenure track recruitment has deepened the chasm between genders.4 In the academia, the glass ceiling seems to be as solid as ever, although differences between fields are significant.5

Regarding pay and factors bolstering inequality, Lätti draws our attention to the effects of issues such as performance management and the new collective bargaining agreements that have made wage negotiations increasingly local. On the other hand, career progression is affected by the gendered nature of family leave and the way administrative, collective, and meta-work piles up on women. As Leena Näre has pointed out, the work and wage discrimination experienced by women is connected to structural issues related to career progression.6 An underlying factor is the popular idea that researchers are by default male.

The recent FUURT questionnaire for early career researchers highlighted the disparity between the experiences of male and female researchers regarding equality in the academia. Women were less likely than men to consider the treatment of people in their department equal. They were also more likely to consider that being a man is an advantage in an academic career.7 Jytte’s questionnaire also pointed out blatant discrimination and sexism: female researchers reported the prevalence of sexual innuendo and harassment. Female early career researchers are also often subjected to gender-based belittling.

What should female researchers do when they encounter discrimination and harassment? In case of sexual harassment, it is good to inform your colleagues and immediate supervisors as well as your harassment contact person. Problems related to your employment, salary, and workload should be reported to your shop stewards. The Ombudsman for Equality can be requested to investigate discrimination at hiring. It is also important to remember to fight for your rights for example when doing your workplan. Make sure you familiarise yourself with the collective bargaining agreement once it has been finalised next spring. 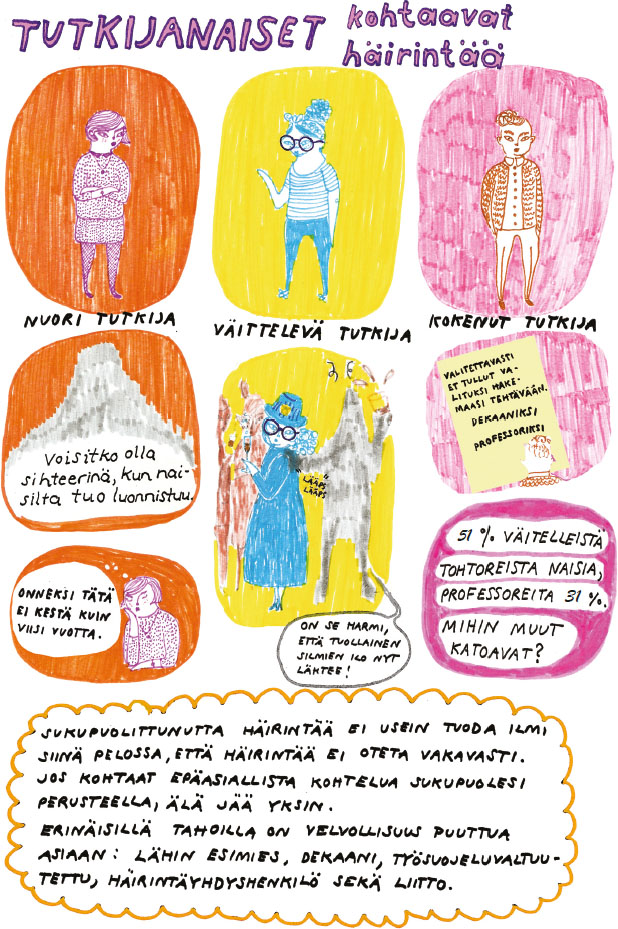 In 2019, four comics dealing with the misuse of power are published in Acatiimi. The comics are drawn by the artist Sirpa Varis. They are based on the misuse of power in universities experienced or witnessed by members of Jytte. The production of the comics has been supported financially by the Finnish Union of University Researchers and Teachers.